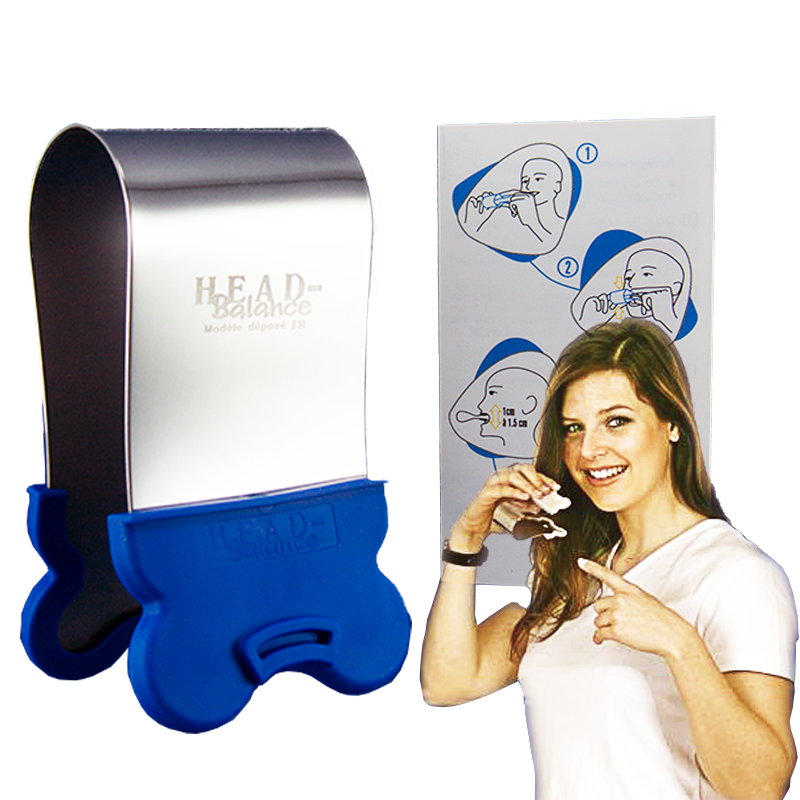 Chewing is almost in all individuals, traumatic, because it is done on one side (right or left) and this is accentuated in case of dental problems.

By doing oral gymnastics with the Head Balance device, which has been developed, tested and advised by therapists, by its relaxing and toning action for bodybuilding, is a natural, preventive and curative remedy for people who suffer from:

... due to an imbalance in the jaw joint.

Chewing is almost in all individuals, traumatic, because it is done on one side only (right or left), and this is accentuated in case of dental problems.

This leads to asymmetrical muscle tone, and subsequently an imbalance of the temporomandibular joint that will affect the whole body.

Some chewing muscles such as :

An imbalance at their level causes tension in the temporal, trapezius and sternocleidomastoid muscles, which by compressing nerves and blood vessels, can trigger migraines, headaches, neuralgia and cause displacement of the cervical and thoracic vertebrae. This tension is accentuated by stress, changes in atmospheric pressure, fatigue

After registering his model and trademark worldwide and his patent, Alfred Pfennig had his devices manufactured by a craftsman from the Jura. In the space of three years, Head-Balance has grown in most countries of the European Union, the United States, Canada, Australia, Israel. It is professionals of the medicine of phytotherapy and orthodontics who ensure the distribution. Head-Balance is also presented and sold at medical congresses.

Contacts are underway for its prescription in the medical field as well as in-depth studies with the dental profession of the Faculty, as well as a deliberation with French mutuals.
Alfred Pfenning presented his product at the Lépine Competition, he was immediately admitted to compete.

The gold medal earned him the congratulations of the President of the Lépine Competition and Dr. Chabrol in Paris.
After extensive clinical studies, Alfred Pfennig , who has been practicing medicine in Germany since 1994 , has created an oral gymnastics device (the Head-Balance) that allows thanks to symmetrical chewing work to have a muscular balancing action of the head, neck and back, and digestive muscles.

Head-Balance: an easy-to-use device, made of spring steel, the device includes two elastomer tips (food) whose shape has been well studied so that the incisors and canines are positioned correctly, the pressure is thus restored on the entire jaw, which allows use for any person, young or old, wearing a dental prosthesis or not.
By its well-centered position which causes a certain resistance, the muscles on both sides work simultaneously.  The actions of the Head-balance on the temporomandibular joint, on the dynamic work of the muscles that contract and balance make it of interest to dentists.

The exercises are not restrictive because they are short-lived.

A good balance of the jaws allows a simple and precise work.

How does it work?

In a sitting position, put the device in the mouth by positioning the incisors behind the boosters chew 15 times slowly by opening and closing the mouth without crushing the device, head straight, 15 times slightly left, 15 times right.

Doctor and osteopath, Alfred Pfennig explains: " It was by wanting to treat a patient accustomed to severe migraines that I was led to imagine the concept that made it possible to completely eliminate all pain at the back of the occiput." I made him work his jaw with a kind of plastic clipboard. In less than five minutes his pain was gone. It was from there that I sought to develop a clothespin-style system that allowed support on the canines. The right and left sides are worked simultaneously with the same force: this is how we rebalance the whole. Because imbalances in the jaw, often related to dental problems, create tension on the whole body. All the muscles of the body are connected to the head, the imbalance of the jaw causes neuralgia, displacements of vertebrae. With the Head-Balance, in three times a minute a day, we rebalance the whole, we refortify the atrophied muscle fibers and we relax those that are tense ".

4 other products in the same category: